On June 20, a panel of distinguished scholars discussed „Jewish Jesus Research and Questions of Christology“. The event at the Universitá Gregoriana was part of The Encyclopedia of Jewish-Christian Relations project (EJCR), a research and publication project initiated by Abraham Geiger College. The EJCR aims to create an overview of the centuries-long history of Jewish Christian interaction up until the present day. In his presentation, Abraham Geiger College’s rector Rabbi Professor Walter Homolka argued that the Christian challenge now is to formulate a new Christology.

The exciting panel discussion was also an occasion to mark five years of Jewish Theology at the University of Potsdam. It was held in conjunction with the 10th Enoch Nangeroni Meeting, „Gender & Second Temple Judaism“, chaired by Shayna Sheinfeld and Kathy Ehrensperger. Ehrensperger, Research Professor of New Testament in Jewish Perspective at Abraham Geiger College, serves also as the EJCR’s Executive Editor. While gender is discussed at other conferences and seminars on Second Temple Judaism, it is always as a peripheral topic: a presenter who discusses a text that includes women will usually touch on the subject; likewise, specific portrayals of masculinity may be noted in some texts. Gender as the focus, however, is rare. Our goal in this seminar was to bring into sharp focus the need for a discussion of women in particular and gender in general in light of Second Temple Judaism. 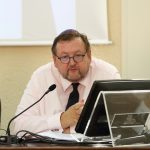 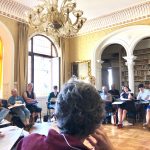 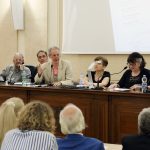